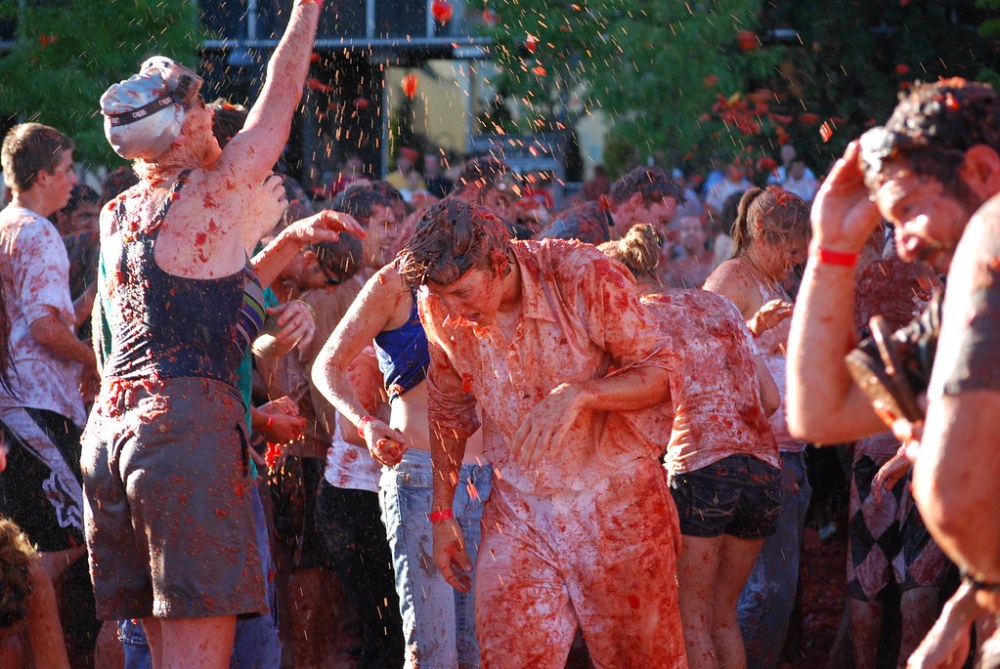 Once a year, one particular street in the sleepy town of Buñol, Spain becomes a red, ankle-deep tomato juice river, flowing with flip-flops, t-shirts, beer cans, and the occasional Afro wig.

Buñol, which is a one-hour train ride from Valencia, has been hosting La Tomatina since 1945. There are various theories about how it began. Some say a couple of friends got into an argument at a local restaurant, which eventually turned into a food fight. Others believe it began as an anti-Franco protest. And still, another explanation is that the tomato war began between two opposing groups of youths: Think the Socs and the Greasers from the book “The Outsiders.”

Regardless, what began as the flinging of a few tomatoes in a quiet and unassuming town, has grown into an annual festival on the last Wednesday of every August, to which nearly 20,000 white-shirt-wearing warriors flock.

Our La Tomatina experience begins when we leave at 7a.m. to catch a bus to the Valencia train station. After a bit of jostling at the ticket window, we make it onto a packed train bound for Bunol, which is 45 kilometres outside of Valencia.

We hop off the train at 8:30 a.m. and are greeted by the cheery beat of Latin techno music and stands with hand painted signs advertising 1-litre cups of sangria and beer.
We make our way through town, down narrow, winding cobblestone streets and stairs, passing rowdy groups of locals who have been partying all night long, and even rowdier newcomers.

Meanwhile, Bunolites are sitting on their balconies and front steps, directing us with knowing nods and grinning at our liquid breakfast.

We can hear the echo of faint cries as we approach the tomato fight location, which rises to a deafening roar as we arrive at ground zero.

Naturally, the tomato fighters are wearing as much white as possible. Some look more like Olympic swimmers than food fighters, donning goggles, swimming caps, earplugs and diving masks. Most are carrying an alcoholic beverage.

A couple of hours before the tomato fight starts, the locals grease a 20-foot pole and tie a sack of ham to top. The first person to grab the ham is the hero of the day.

The expanding crowd watches with excitement as men, women and children scramble over one another to grab the ham thigh. Pants are pulled down, heads are smooshed and bodies are greased in the process. Minutes before the fight begins – as if on cue – someone claims the prize.

The songs finally entice the truck drivers out of their hiding place and the crowd cheers frantically as the first dump truck comes into view. Everyone squishes on either side of the road to let the trucks through and the effect is as crushing as a Metallica mosh pit.

Honking at full blast, the convoy of trucks crawls by, carrying an army of garbage-bag-clad soldiers armed with nearly 140 tonnes of tomato ammunition. Our hands are stuck at our sides in the crushing crowd and the crimson mush splatters on our faces
Then, the games begin:

The fight only lasts for an hour – enough time for five dump trucks full of waterlogged tomatoes to soak everyone and everything with seedy, red juice. Locals dowse the crowd with fire hoses and soft wet, tomato pulp flies in every direction. Regardless of age, gender, or height, you are a target.

During the chaos, a small contingent of locals hunts for t-shirts – while they’re still on people. They shout in a tribal chant “Camisetta! Camisetta! Camisetta!” as they make their way through the crowd ripping off dripping shirts as they go.

When the fight is over, the crowd eases, although some die-hard fighters are still engaged in tomato warfare.

The water-drenched, tomato-stained combatants waddle uncomfortably back through the tiny streets of Buñol. Locals lend a hand by hosing off visitors from their balconies and makeshift showers.

The 55-minute train ride home is a long, putrid one. There is nothing worse than the feel of dried tomato caked to your hair; and in other places it just doesn’t belong. The scent is enough to induce vomit.

One of the few negative aspects of La Tomatina is the shower that night. I spend 15 minutes picking chunks of fleshy tomato bits out of my dread-locked hair before I can even apply shampoo and conditioner. To make matters worse, the stench of a thousand mushy tomatoes does not wash down the drain. It lingers in your nostrils long after you comb the last seed out of your hair.

The next morning, I buy tomatoes and cheese for my sandwich – and eat every last bite. That’s the beauty of tomatoes. No matter how many you’ve had to wear, you’ve just got to love ‘em.

To visit La Tomatina, be sure to book Valencia accommodation well in advance. There are some excellent last-minute deals on quality hotels within Valencia, so hunt for bargains. Tours are also available through Tomatina Tours, a division of Triangle Sports Social Club, which arranges the itinerary for travellers, including a stop in Ibiza.

Some tips for the big day: